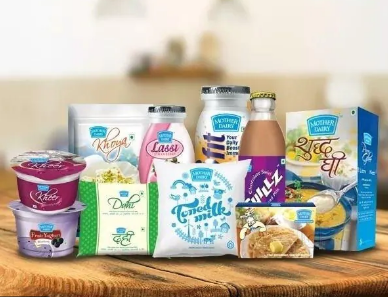 Mother Dairy, a wholly owned subsidiary of the National Dairy Development Board, has announced a hike in prices of full cream milk by Rs 1 per litre and token milk (bulk vended milk) by Rs 2 per litre in Delhi-NCR from Monday, citing increase in feed costs. This will be the fourth hike in milk prices this year by Mother Dairy, one of the leading milk suppliers in the region. Full cream milk will now cost Rs 64 per litre, one rupee more than before, but the company has not revised the price for 500 ml packets at Rs 32. Token milk will be sold at Rs 50 per litre as against Rs 48 per litre earlier. October 16, the company had hiked the prices of full cream milk and cow milk by Rs 2 to Rs 63 per litre and Rs 55 per litre, respectively. The Gujarat Cooperative Milk Marketing Federation, popularly referred to as Amul, had also increased the price of buffalo milk and full cream milk by Rs 2 per litre in all markets except Gujarat.

Both Companies Had Hiked Prices of all Variants By Rs 2 per Litre in March and August.

While stating that the dairy industry is witnessing a huge gap in the demand and supply of milk, a Mother Dairy spokesperson said on Sunday that “raw milk availability has been impacted due to the increased cost of feed and fodder, erratic monsoon”. Milk inflation in October was reported at 7.69%. According to industry estimates, of around 9 million litres of milk supplied daily by organised dairy players in Delhi-NCR, Mother Dairy and Amul have a share of around 40% each. In September, FE had reported that Mother Dairy, which reported sales of Rs 12,500 crore in 2021-22, aims to achieve a 20% increase in sales turnover to over Rs 15,000 crore in the current fiscal.